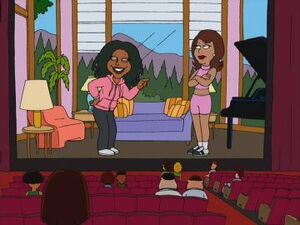 Angela Evelyn Bassett (born August 16, 1958) is an American actress. She has become well known for her biographical film roles portraying real life women in African American culture, perhaps most prominently as singer Tina Turner in the motion picture What's Love Got to Do with It, as well as her portrayal of Betty Shabazz in the films Malcolm X and Panther, Rosa Parks in The Rosa Parks Story, Katherine Jackson in the miniseries The Jacksons: An American Dream and Voletta Wallace in the film Notorious. She also starred as Stella in How Stella Got Her Groove Back.

She stars with Whoopi Goldberg in How Stella Got Her Groove Back II in "There's Something About Paulie". She is also seen on a poster for the film located at the theater.

Retrieved from "https://familyguy.fandom.com/wiki/Angela_Bassett?oldid=221112"
Community content is available under CC-BY-SA unless otherwise noted.