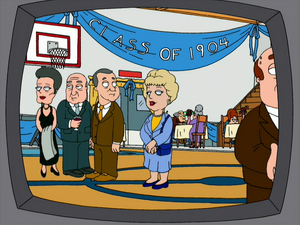 Angela Lansbury (born October 19, 1925) is a British-born actress and singer whose career has spanned eight decades. Lansbury is more recently known for her role as mystery writer, Jessica Fletcher, on the U.S. television series, Murder, She Wrote, a role she played from 1984 through 1996.

She appeared as Fletcher in "Brian: Portrait of a Dog" on her show in an episode the Griffins watched. Later, at the dog show, her character admitted having an abortion. She was voiced by Mary Scheer.

Retrieved from "https://familyguy.fandom.com/wiki/Angela_Lansbury?oldid=214697"
Community content is available under CC-BY-SA unless otherwise noted.