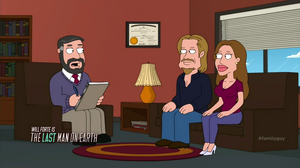 Angelina becomes the subject of one of the guys' "Would you rather?" games in "Believe It or Not, Joe's Walking on Air", in which Quagmire asks Peter if he'd have sex with Cleveland if it meant getting to have sex with Angelina Jolie.

Peter goes off on a tangent about Angelina Jolie and her relationship with her brother in "Blue Harvest".

The poster promoting "Stewie Kills Lois"/"Lois Kills Stewie" is a parody of the movie poster for Mr. and Mrs. Smith, starring Brad Pitt and Jolie.

Quagmire accuses his mom of being a worse parent than Jolie and Brad in "Quagmire's Mom".

Angelina is voiced by Alex Borstein.

Retrieved from "https://familyguy.fandom.com/wiki/Angelina_Jolie?oldid=224315"
Community content is available under CC-BY-SA unless otherwise noted.