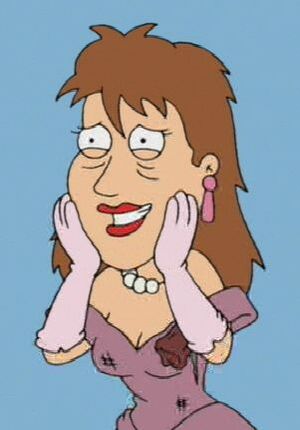 Angie is the attractive but mentally unstable ex-girlfriend of Peter Griffin.

Years after they broke up, Peter, attempting to make Lois jealous, looks her up in "Stuck Together, Torn Apart". She was his prom date and is so obsessed with Peter that she never washed her hand after Peter last touched it. She appears to be wearing her prom dress. She also kept Peter's feces in the toilet after he defecated in it on prom night and did not flush. She talked to it as though it were alive and sprinkled fish food on it.

Retrieved from "https://familyguy.fandom.com/wiki/Angie?oldid=212369"
Community content is available under CC-BY-SA unless otherwise noted.