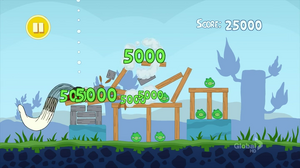 Angry Birds is a video game franchise in which players use a slingshot to launch birds at swine stationed on or within various structures, with the intent of destroying all of the Bad Piggies, the main antagonists of the game.

They make an appearance in "Turban Cowboy" as victims of one of Peter Griffin's skydiving accidents. Ten of the eleven piggies present were popped, earning Peter 50,000 points in total. Peter gets upset at the surviving piggy, telling it that 90% of people playing this are pooping.

Lois allows Peter to play Angry Birds in the courtroom in "Quagmire's Mom" but only with the sound turned off. Instead, Peter makes his own sound effects.

Peter's Huckleberry Finn in "High School English" plays "Angry Birds" by flipping real birds in the direction of a pen of pigs.

Retrieved from "https://familyguy.fandom.com/wiki/Angry_Birds?oldid=191091"
Community content is available under CC-BY-SA unless otherwise noted.