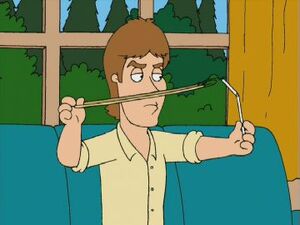 Peter Griffin wrote a letter to him in invisible ink. He was seeking MacGyver's help in getting his dog Brian out of jail in "Brian: Portrait of a Dog". Peter told him to do an assortment of things with very useless items. He ended up receiving the letter, looking blank. While trying to figure out what to do with the items, the rubber band ended up hitting his eye.

Retrieved from "https://familyguy.fandom.com/wiki/Angus_MacGyver?oldid=115984"
Community content is available under CC-BY-SA unless otherwise noted.