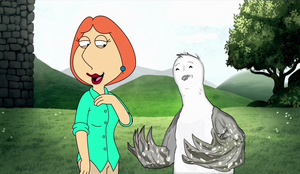 Animals. is an American animated comedy television series. After the first two episodes were independently produced and presented at the Sundance Film Festival, HBO picked the series up.

In HBO's second episode of the second season "Pigeons", a young pigeon named Jacob imagines a journey, culminating in finding Lois Griffin as a princess, voiced by Alex Borstein who reprises her role. As they nearly kiss, he is brought back to reality, leaving Lois to wonder where she is and why she wasn't requested to take her shirt off, noting that she wasn't used to her full potential.

Retrieved from "https://familyguy.fandom.com/wiki/Animals.?oldid=195280"
Community content is available under CC-BY-SA unless otherwise noted.