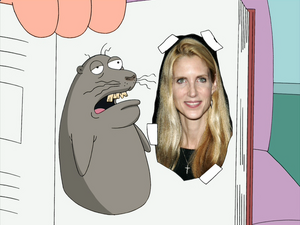 Ann Hart Coulter (born December 8, 1961) is an American social and political commentator, best-selling author, and syndicated columnist. She frequently appears on television, radio, and as a speaker at public and private events. Well known for her conservative political opinions and the controversial ways in which she defends them, Coulter has described herself as a polemicist who likes to "stir up the pot" and, unlike "broadcasters," does not "pretend to be impartial or balanced."

Coulter is shown being cold in more ways than one in "FOX-y Lady".

In the uncensored versions of "Quagmire's Dad", Peter Griffin helps Chris with his French lessons including the word "phoque" for seal. As they run through a series of word combinations, Peter holds up a photo of Coulter to form "Ugly phoque and bitch."

Retrieved from "https://familyguy.fandom.com/wiki/Ann_Coulter?oldid=164302"
Community content is available under CC-BY-SA unless otherwise noted.