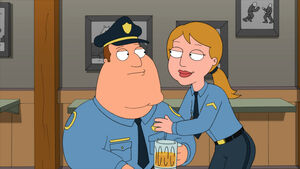 Anna Kendrick (born August 9, 1985) is an American actress, known for Up in the Air, for which she received an Academy Award nomination for Best Supporting Actress. Her other work includes The Twilight Saga, Scott Pilgrim vs. the World and Pitch Perfect and its sequel.

Retrieved from "https://familyguy.fandom.com/wiki/Anna_Kendrick?oldid=225562"
Community content is available under CC-BY-SA unless otherwise noted.