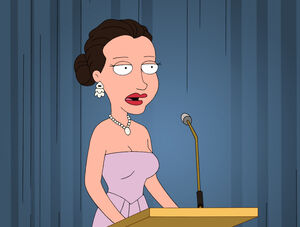 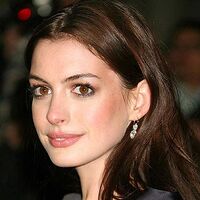 Anne Hathaway (born November 12, 1982) is a singer and actress. She is best known for appearing in such films as The Princess Diaries and its sequel, Ella Enchanted, The Devil Wears Prada, Rachel Getting Married, The Dark Knight Rises and won an Oscar for her performance in Les Miserables.[1]

She portrayed the American version of Mother Maggie for Jolly Farm Revue in "Go, Stewie, Go!".

She appeared as herself in "April in Quahog", and voiced a "Hot Blonde" in It's A Trap!.

When Stewie becomes a celebrity in "The Peanut Butter Kid", Peter feels he understands what it is like to be Anne Hathaway's parents. A cutaway shows her arriving in her car, while her parents groan at her arrival.

When Lois gets a shorter haircut in "Short Cuts", Peter compares her look to Anne Hathaway in Les Miserables, but is smacked and told never to compare her to Anne.

When Peter is grounded by Lois for acting like a child in "Undergrounded", he gets a call from his friends that Tom Brady is outside the house throwing passes to the neighbors. When he tries to get permission from Lois to go outside, he finds that she's outside already and grants him permission to go with them to see an Anne Hathaway movie. This causes Peter to change his mind about going out.

Retrieved from "https://familyguy.fandom.com/wiki/Anne_Hathaway?oldid=228535"
Community content is available under CC-BY-SA unless otherwise noted.