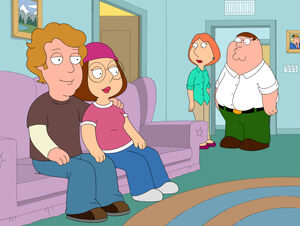 Meg's mother Lois gets jealous of the couple while in the middle of an aging crisis. She confronts him about her feelings and Meg catches the two making out on the couch when she gets home.

It is later suggested by Meg that the two had engaged in various lewd sexual acts, including autoerotic asphyxiation by her mother's bra. She also states that she had "done things for him" and had "gone places" that her mother could not have imagined.

Anthony is voiced by Lucas Grabeel.