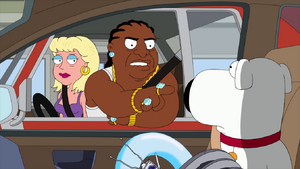 Anton is the pimp of a prostitute that tries to extract $100 from "Brian" in "Switch the Flip".

When Stewie offers to help Brian straighten out his life, he creates a device to allow them to swap bodies, but finds it isn't so easy being Brian. Depressed and hanging out at The Drunken Clam, Stewie believes he's going to score both a girlfriend and a "job" in the men's room with a girl he meets who turns out to be a prostitute. As he bolts, her pimp Anton demands $100 for the services nearly provided but Stewie manages to escape.

Later, after another mishap results in Chris and Brian swapping bodies, they attempt to rescue Stewie from a sex retreat with Lois after he ends up in Peter's body. Anton rams their car, still demanding the money. They manage to elude them, but smash into a power pole in the process, causing the transformer to amplify the swapping machine so that nearly all of Quahog is affected.

Retrieved from "https://familyguy.fandom.com/wiki/Anton?oldid=204367"
Community content is available under CC-BY-SA unless otherwise noted.