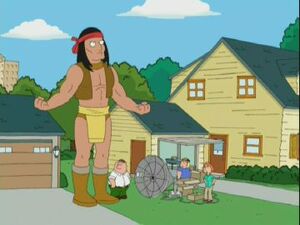 Apache Chief is a Native American superhero from the various Super Friends cartoons expressly created by Hanna-Barbera for the series. He was one of the new heroes added during the 1977 series Challenge of the Super Friends along with Black Vulcan, Rima the Jungle Girl, El Dorado and Samurai to increase the number of non-white characters in the Super Friends ranks.

He makes an appearance in "PTV", helping Peter Griffin place a satellite dish on his roof by reciting "Apache Chief-Inyuk-chuk," which means Big Man, where he grows to giant-size. Afterwards, having nothing else to do, he dejectedly says that it was the high point of his day, and decides to go gamble. He is voiced by writer John Viener.

Glenn Quagmire forces an erection in front of Loretta Brown by saying "Apache Penis-Inyuk-chuk" so he can re-woo her in an attempt to prove that she hasn't changed in "Love, Blactually".

Retrieved from "https://familyguy.fandom.com/wiki/Apache_Chief?oldid=223608"
Community content is available under CC-BY-SA unless otherwise noted.