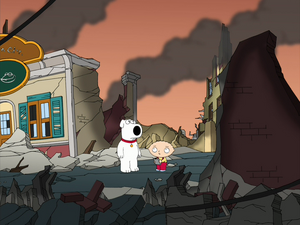 The Apocalyptic Universe was the tenth universe that Stewie and Brian went to in the "Road to the Multiverse". The events leading to the apocalypse were revealed to be caused by Frank Sinatra never being born, thus never being able to influence John F. Kennedy's election, leading Richard Nixon to win. The President then poorly handled the Cuban Missile Crisis, leading the world to a World War III and its eventual destruction. In a side story, Mayor McCheese was shown to have been assassinated by Lee Harvey Oswald.

Retrieved from "https://familyguy.fandom.com/wiki/Apocalyptic_Universe?oldid=117063"
Community content is available under CC-BY-SA unless otherwise noted.