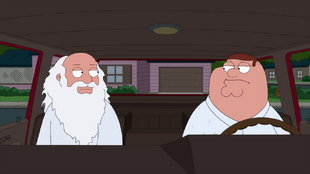 Are You There God? It's Me, Peter
Peter meets God after falling into a coma. 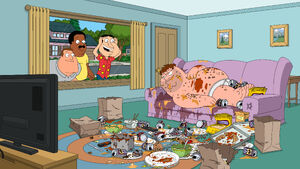 When Peter spends a weekend on the couch enjoying a free premium channel binge, he becomes permanently stuck to it. When he refuses the treatment of ripping it off of his back very fast, Lois tries to take matters into her own hands by cutting him lose herself with the aid of the kids while he sleeps in their bed. Peter awakens and tries to take himself and the couch downstairs with Chris' help, but ends up being shoved through the door and down the stairs and ends up in a coma. 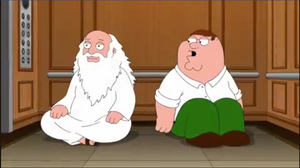 He finds himself stuck in an elevator with God. As he tries to pass the time making small talk about life and celebrities, he complains that the elevator is taking a long time to move. God reveals that the elevator is actually awaiting his own decision to send Peter to Heaven or Hell. After he points out that Peter has been a lousy husband and father and opinions that the family might be better off without him, he begs for another chance, to which God agrees to give him an extra day. However, a dinner out results in disaster with Peter blowing his top at the family. On the way home he sees images of God everywhere and realizes he blew it. After getting the family safely home, he is joined by God and surrenders, declaring that God was right and his family is better off without him. Peter's contriteness and subservience in an imaginary being is all God wanted and allows him to return him to his family until his expected death four years in the future.

Previous Episode /// Are You There God? It's Me, Peter \\\ Next Episode

Retrieved from "https://familyguy.fandom.com/wiki/Are_You_There_God%3F_It%27s_Me,_Peter?oldid=209938"
Community content is available under CC-BY-SA unless otherwise noted.