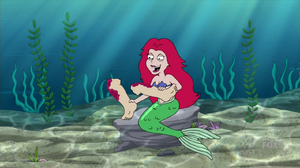 When Quagmire takes Joe parasailing in "Hot Pocket-Dial", he loses his legs as they are dragged through the water. Below, Ariel wishes she had a pair of legs just as his drift to her. Ariel hungrily grabs them and starts eating them, admitting that the fish part of her really wanted the legs for food.

Retrieved from "https://familyguy.fandom.com/wiki/Ariel?oldid=195067"
Community content is available under CC-BY-SA unless otherwise noted.