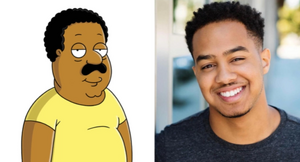 Arif Zahir (Born April 15, 1994) became the voice of Cleveland Brown, taking over from Mike Henry in "LASIK Instinct". However, Mike would continue to be credited as Cleveland in holdover episodes from the previous season, although Cleveland has no lines in "Rock Hard" or in "Must Love Dogs".

Zahir had previously done imitations of Cleveland on his YouTube channel under the name of 'Azerrz'.

In a statement, Zahir stated, "Firstly, I'm eternally grateful to have received this once in a lifetime opportunity, When I heard that Mike Henry was stepping down from the role of Cleveland Brown — my favorite cartoon character of all time — I was shocked and saddened, assuming we’d never see him again. When I learned I would get to take over the role? Overabundant gratitude. To Mike, you created something truly special and I promise I will do my absolute best to honor your legacy. To Rich Appel, Alec Sulkin and Seth MacFarlane, thank you for this incredible gift. And to the millions of fans who love this show, I promise not to let you down."[1]