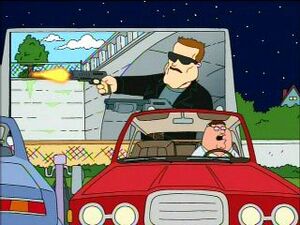 Arnold Alois Schwarzenegger (born July 30, 1947) is an Austrian American bodybuilder, actor, model, businessman, and politician, formerly known as the 38th Governor of the state of California.

He first appeared in "Brian in Love" on a drive-in movie screen shooting at his enemies. Peter Griffin can't see any of this because his car is turned in the other direction.

In "One if by Clam, Two if by Sea", he stars in an "action" film produced by British people with him and Sylvester Stallone as possibly gay lovers.

In "Meg Stinks!", Stewie believes that Brian not being in the house is stranger than Arnold without an accent. He then appears in a scene from Kindergarten Cop where he blandly says "It's not a tumor" accent-less.

When the guys watch The Terminator at The Drunken Clam in "Cop and a Half-Wit", he appears demanding to have sex with a woman's housekeeper. She recognizes him as simply Arnold Schwarzenegger and insists she doesn't have a housekeeper. When one shows up, Arnold accuses her of lying to him. Arnold also interrupts a cutaway gag about a 'designated Shriver' at a party, making the same demand for sex with the housekeeper.

Meg compares her stomach growling to Arnold gasping for air on Mars at the end of Total Recall in "No Giggity, No Doubt".

Retrieved from "https://familyguy.fandom.com/wiki/Arnold_Schwarzenegger?oldid=211204"
Community content is available under CC-BY-SA unless otherwise noted.