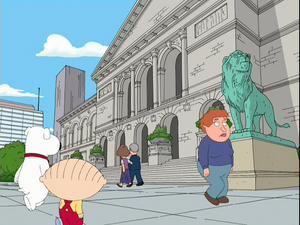 The Art Institute of Chicago (AIC) is an encyclopedic art museum located in Chicago's Grant Park. It features a collection of Impressionist and Post-Impressionist art in its permanent collection.

In "The Tan Aquatic with Steve Zissou", the museum, misnamed as the Chicago Museum of Art, is featured as one of Stewie Griffin's last things to do before he thinks he'll die of cancer. The scene is a direct homage to the film Ferris Bueller's Day Off. The painting Stewie stares into is Sunday Afternoon on the Island of La Grande Jatte.

Peter visits the museum during a break following a work meeting in "The Most Interesting Man in the World" in order to pick up some culture. During an audio tour narrated by Dennis Farina who is eating while narrating.

Retrieved from "https://familyguy.fandom.com/wiki/Art_Institute_of_Chicago?oldid=161927"
Community content is available under CC-BY-SA unless otherwise noted.