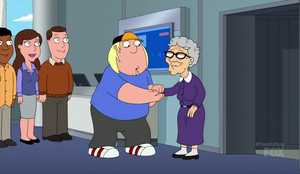 Ashley is the woman of Chris' dreams in a cutaway gag in "The Boys in the Band".

When Chris is told to get a job for money, he considers trying to get his old job back as the guy racing to the airport at the end of a romantic comedy. As he gets assistance from the people he encounters, he arrives just as a young, beautiful woman is about to board. As he calls out to her as everyone looks on, she goes to fetch her grandma who is revealed to be the real object of Chris' pursuit, to everyone's disgust.

Retrieved from "https://familyguy.fandom.com/wiki/Ashley?oldid=212569"
Community content is available under CC-BY-SA unless otherwise noted.