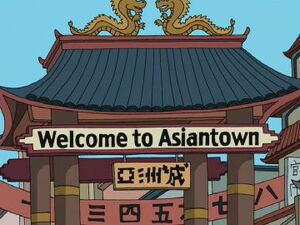 Asiantown is a generic Asian village in Rhode Island. The Griffins take refuge there while on the run from the police, specifically Joe Swanson, after breaking Lois out of jail in "Breaking Out is Hard to Do". Peter initially mistakes everyone for Jackie Chan. When the family takes jobs, Stewie finds employment in a sweatshop, Chris taxis people around town via a pulled rickshaw, and Peter competes on Sumo Tonight. It has its own television station, CBS: Asiantown. It even has its own branch of the Trix company and its own version of Three's Company.

Retrieved from "https://familyguy.fandom.com/wiki/Asiantown?oldid=220876"
Community content is available under CC-BY-SA unless otherwise noted.