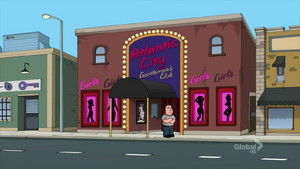 The Atlantic City Gentleman's Club is where Joe Swanson and the guys track down Bobby Briggs' girlfriend Tanya in Joe's Revenge". Bobby is the drug dealer that shot and crippled Joe. After he escapes from police custody, the guys decide to go after him themselves and go to see Bobby's girlfriend in Atlantic City where she works as a stripper in the club. While there, Peter sees evidence that Quagmire may have children in the area. They locate Tanya but after she refuses to answer Joe's questions Quagmire tries a lap dance. When this fails he then resorts to a "Vulcan V-meld"to find out Bobby's address from Tanya.

Retrieved from "https://familyguy.fandom.com/wiki/Atlantic_City_Gentleman%27s_Club?oldid=143570"
Community content is available under CC-BY-SA unless otherwise noted.