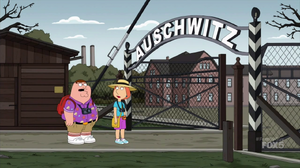 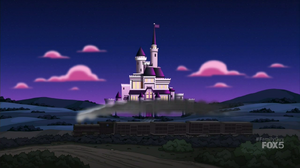 Auschwitz was a network of German Nazi concentration and extermination camps built and operated by the Third Reich in Polish areas annexed by Nazi Germany during World War II. From early 1942 until late 1944, transport trains delivered Jews to the camp's gas chambers from all over German-occupied Europe.

When Peter claims that Lois is always tricking him into going places that he doesn't want to visit in "Hot Pocket-Dial", a cutaway shows them at the gates of Auschwitz, as Lois points out that Walt Disney supported such constructs. A wider view shows the Disney World-style opening used by Walt Disney Pictures since 2006, but instead of the theme park's trains, a transport train appears as Lois warns Peter to stay off the train ride.

"Millennials" count taking selfies at Auschwitz as an "authentic experience" in "HTTPete".

Retrieved from "https://familyguy.fandom.com/wiki/Auschwitz?oldid=204654"
Community content is available under CC-BY-SA unless otherwise noted.