Baby, You Knock Me Out 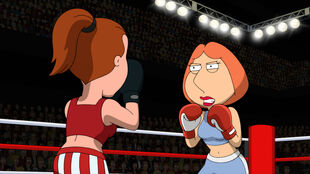 Baby, You Knock Me Out
Peter becomes Lois' boxing manager. 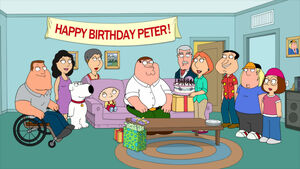 The episode begins with Peter, excited about his upcoming birthday. On his birthday, Joe gives Peter a globe, which he is reluctant to receive. Even Cleveland sent a card to Peter although he failed to turn off the recording. As a result, Peter heard Cleveland singing a song which he was listening to in his car radio, when he is pulled over and assaulted by a racist cop, he attempts to run, but is shot repeatedly and is attacked by hounds. Peter closes the card and assumes Cleveland is fine. Peter later receives tickets for a boxing match from Quagmire. At the boxing match, it's announced the house champion will take on all comers. Peter uses a plaster hand based off of Lois' hand, raises it, and attempts to set her up for a match. Lois assumes that it would be a fun match, she is proven wrong when the woman punches her. Lois loses her temper soon enough and defeats her quickly. Peter attempts to become Lois' manager, but Lois refuses to fight anymore. Peter tricks Lois by saying that would be going to a "fancy" restaurant, and blindfolds her. Peter reveals that Lois will be fighting. Lois attempts to explain to her opponent that it's all a misunderstanding. Lois quickly loses her temper and imagines that her opponent is Peter and quickly wins the fight, and later wins many more fights. 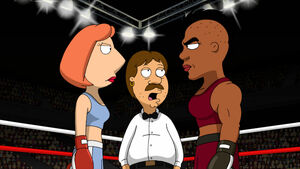 Soon enough, Lois breaks her nose and reveals to Peter that she has been picturing her opponents as him and says she got most of it out of her system and retires. Mayor West later celebrates Lois' victories and her retirement. Deidre Jackson appears to challenge Lois to a fight, which she refuses. Deidre then humiliates Peter causing Lois to accept the challenge. In the news, Deirdre Jackson states that she will kill Lois, as she did 3 other women, in the sixth round, which Peter fears may be true. Lois later fights Deidre Jackson and is beaten senseless each round. At the sixth round, Lois is almost beaten, but fights back and wins. Lois officially quits after the match and goes back to providing for her family.

Previous Episode /// Baby, You Knock Me Out \\\ Next Episode