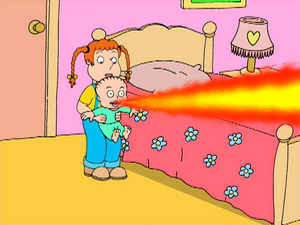 Baby Heimlich is a baby doll made by the Happy-Go-Lucky Toy Company that eats, drinks, and wets. Instead of being able to be burped, it ends up choking on its food, and abdominal thrusts, commonly known as the Heimlich maneuver, must be performed.

In "Death Has a Shadow" and the original Pilot Pitch, because Peter Griffin did not monitor the conveyor belt for dangerous items, Baby Heimlich has a flamethrower-like mechanism installed. The toy is later purchased by a little girl's parents or delivered to the little girl's home. She is seen playing with it, successfully performing the Heimlich, and the toy breathes fire.

Retrieved from "https://familyguy.fandom.com/wiki/Baby_Heimlich?oldid=118450"
Community content is available under CC-BY-SA unless otherwise noted.