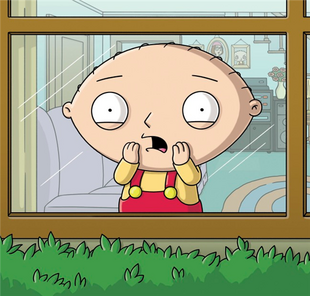 Baby Not On Board
The Griffin family forgets to take Stewie on a road trip. 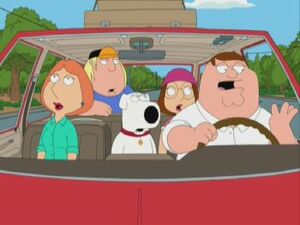 When Chris asks Peter for personal advice concerning that his testicles at the convenience store where he works, Peter threatens to sue the store for sexual harassment. Peter is given a coupon for unlimited gas for a year by the store owner to keep quiet. Lois suggests Peter use the card for a family vacation. The family decides to drive to the Grand Canyon. They leave early the next morning but inadvertently leave a sleeping Stewie behind at home. He wakes up to discover that he is home alone, and that he can do whatever he wants. 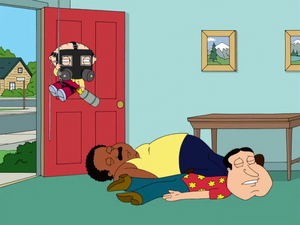 While stopping off at the ruins of the World Trade Center to pay respects, the rest of the family realizes that they left Stewie behind in Quahog. They call Cleveland and Quagmire to babysit him. As soon as they come in to the house, Stewie believes they are intruders and knocks them out with a noxious gas but, discovering their true identities, he chains them to the basement wall and force them to watch the 24-Hour DirecTV help channel. When Stewie eats up all the food in the house, he gets a job at McBurgertown, but is fired for eating food on the job.

After not receiving any calls from Cleveland and Quagmire for the past eight hours, Lois insists they return home to get Stewie. While driving the car, Peter somehow enters the car next to them to watch a movie, causing the Griffins' car to crash. The Griffins then attempt to take a train home, but Peter squanders all the money they have with them for tickets on helium shower curtain rings. Lois loses her temper and blames all their misfortunes on Peter's stupidity. Peter calls her a cold-hearted cynic and says that everyone else likes him for who he is. Brian manages to get the Griffins a ride on the back of a pickup truck bound for Quahog.

Previous Episode /// Baby Not On Board \\\ Next Episode

Retrieved from "https://familyguy.fandom.com/wiki/Baby_Not_On_Board?oldid=218086"
Community content is available under CC-BY-SA unless otherwise noted.