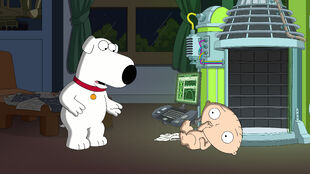 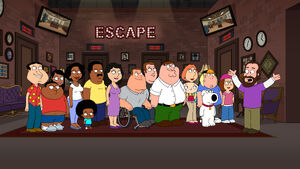 When Quagmire is unable to drink with the guys due to medications, they all decide to do a non-drinking activity by going to an escape room with their families. As Peter and Lois bumble their way through, Stewie informs Brian of the answer to the problem. As they chat later at home, Brian points out that Stewie will lose his intelligence at puberty and provides a video that makes Chris look smart as a baby. Stewie decides to stop the process by rearranging his DNA, but ends up reverting himself to a real baby. 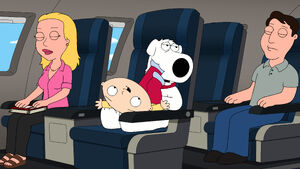 Unable to cope with Stewie's baby form, he tries to undo the damage but has several misfires, with a gremlin-like creature being the end result. He seeks help from Chris, without luck. With everyone closing in on him, he hits on the idea of going back in time to stop Stewie where he convinces him that he'd only played a prank by showing Chris' video in reverse before eating a Rubik's cube and that he will remain smart. In revenge, Stewie has Brian drown his future self in order to restore the timeline.

To fill out the remaining time, the show presents a Pixar-like short of Cleveland having difficulties while delivering mail. 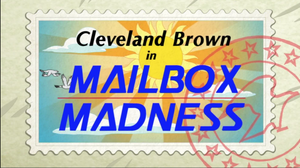