Back to the Pilot 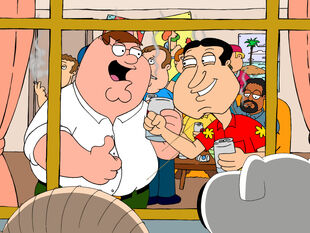 Back to the Pilot
Brian and Stewie travel back in time to the very first episode of the series. 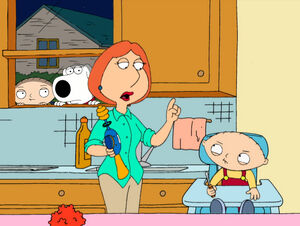 When Brian shows off an old tennis ball he found and wishes he could find another one he buried ten years previously, Stewie offers to take him back in time to note its location. They go back in time and notice that things look very different. After a few antics, they return to the present, only to find out that Brian told his past self about 9/11 and as a result, the present has been changed by preventing 9/11 from happening. Things look okay at first, until they find out that George W. Bush lost the 2004 election with no 9/11 to instill fear in the public for an Iraq War. This results in Bush creating a second Confederacy, which in turn starts a second Civil War. When Brian and Stewie go into a CGI-rendered future, they find out that the U.S. is a post-apocalyptic wasteland. 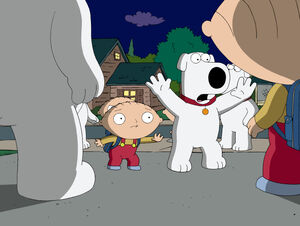 In order to prevent all this from happening, the two go back to the past to stop Brian from spilling the beans to old Brian about 9/11. This seemingly works until it turns out that Brian is now the author of the Harry Potter books. They go back again, and soon they are confronted by multiple Brians and Stewies from different futures. They all start arguing, until the main Stewie yells at them all to get back into their individual return pads and go back to their original time period immediately. After they have left, the original Stewie intercepts themselves arriving into the past for the first time and forces them to return to their own time, shooting Brian in the leg in the process. They then wait for themselves to vanish from existence, as the time travel adventure had never happened. In the present, Brian and Stewie wonder what may have happened, until Peter comes in with his drinking buddies from 1999.

Previous Episode /// Back to the Pilot \\\ Next Episode