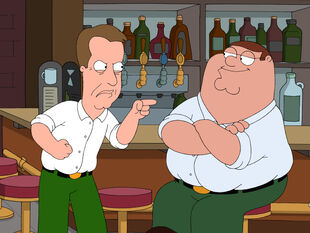 Peter and James Woods square off 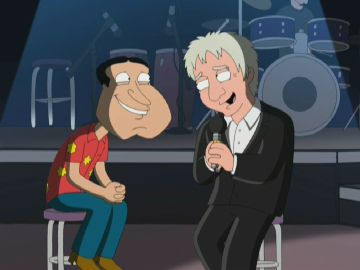 After attending a Barry Manilow concert, Peter realizes that he lost his wallet there. However, he soon discovers that someone has found it, and is using his credit card to buy expensive goods. Peter and Brian track down the culprit to the House of Chung Chinese restaurant and discover him to be none other than James Woods, whom Peter had previously locked away in a Government Warehouse, trapped in a crate without air holes. Naturally, James is bitter towards Peter and, having stolen his wallet, now steals his identity as well. Peter and Brian return home to find James there as well, having claimed ownership of his house and possessions, and even the clothes Peter is wearing. James calls Joe over to remove Peter from the house. The Griffins are outraged by this, but Joe has no other choice but to accede to his request now that James has his identity; he even refers to James as "Peter".

The Griffins are resentful of James for what he has done, especially Lois and Brian. When Brian tells James "You're not going to get away with this, Woods," James responds by calling him an "outside dog" and has him tied in the garden on a leash, to Brian's outrage, citing his Brown education. Unfortunately, Peter is forced to stay off James' property. As James tries to weasel his way into the Griffin family's life, Peter and Brian move into a hotel together, with Peter wanting nothing more than to be with Lois. Peter attempts to sneak into the house, disguising himself as Chris' friend, Scooter, but his identity is revealed after James tricks Peter into taking off his hat. Peter begins to despair until Brian points out that Peter has the ability to assume Woods' identity and get revenge himself. 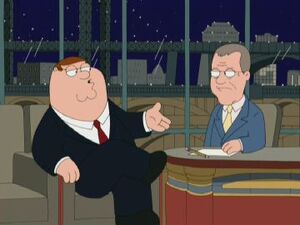 After Stewie forges a fake ID for Peter, he manages to convince the public that he is James Woods. On live television, he makes several remarks in very bad taste that ruin James' career, and to top it off announces that he will be staring in a shallow comedy based on 9/11, called 9/11 "two thousand fun". Where he will be a window washer in the World Trade Center, where he has just finished washing all the windows, only to turn around and see the plane coming, to which he says, "Come On". James instantly goes from being a beloved actor to hated. James is furious and confronts Peter but, exactly as before, Peter and Brian trap him in a box using Reese's Pieces as bait. Peter is happily reunited with Lois and the rest of the family and James is sent back in the crate to the Government Warehouse to be studied by "Top Men" yet again.

Previous Episode /// Back to the Woods \\\ Next Episode

Retrieved from "https://familyguy.fandom.com/wiki/Back_to_the_Woods?oldid=216347"
Community content is available under CC-BY-SA unless otherwise noted.