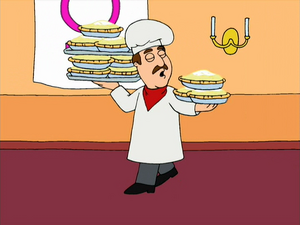 The Number Song series colloquially known as the Baker Films were a series of live-action films produced and directed by Jim Henson to teach counting. It was a segments on the long-running children's television series Sesame Street. Nine such films - one each for the numbers two (2) through 10 - were produced, each featuring adult and child actors/actresses counting a variety of objects such as animals and coins. A children's chorus would then musically count each object, one at a time, and numbers would be placed beside each object. Each film would end with a baker carrying a number of baked goods in his hands, singing the fact e.g., "TEN ... CHOCOLATE LAYER ... CAKES!", after which he would fall down a short flight of stairs; the films are often referred to as the "Baker Films" because of this final gag.

In "I Am Peter, Hear Me Roar" a baker emerges from a kitchen, carrying a stack of ten banana cream pies while melodically pointing out the fact. Instead of falling down a flight of stairs, he is caught in the middle of a catfight between Lois Griffin and her opponent, Gloria Ironbachs.

In "Petarded", after Meg, Chris and Stewie are placed in foster custody with Cleveland and Loretta Brown, Peter tries a variety of tricks to get his children back, including inviting seven prostitutes over. A children's chorus counts the prostitutes, with numbers placed beside each woman after which Peter reaffirms the amount of women.