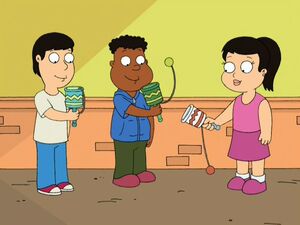 Ball in a Cup is a traditional children's toy, consisting of a wooden cup with a handle, and a ball which is attached to a string, which is attached to the cup. It is popular in Latin American countries, where it is called "balero". The name varies across many countries — in Argentina, Ecuador, Colombia, and Mexico it is called "balero"; in Spain it is "boliche"; in Brazil it is called "bilboquê"; in Chile it is "boliche" or "emboque"; and in Venezuela the game has many names such as "boliche", "perinola", and "juego de la coca". A variant game, "Kendama", known in English as "Ring and Pin", is popular in Japan.

The product was introduced in "The Fat Guy Strangler" via advertisement. Stewie Griffin later had difficulty playing the game. In "Padre de Familia", Stewie spots the children of his grandfather Carter Pewterschmidt's Latino employees playing with the toy. The toy is once again seen in "Road to the North Pole" as a Christmas present for Mayor Adam West from Santa Claus.

Retrieved from "https://familyguy.fandom.com/wiki/Ball_in_a_Cup?oldid=175732"
Community content is available under CC-BY-SA unless otherwise noted.