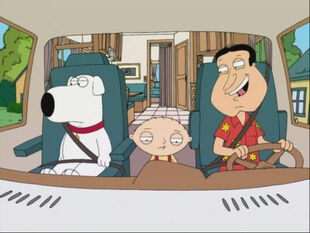 Bango Was His Name Oh
Part 2 of Stewie Griffin: The Untold Story.

Plot: Visiting a local electronic store to get a new VCR, Peter and Lois are persuaded into buying a TiVo. Once home, Brian and Stewie are watching a news interview in San Francisco when Stewie sees someone identical to him. Stewie believes that the man he sees is his real father. Soon he starts trying to make money for a flight to California and once Stewie is ready, Quagmire is all prepared to set out on a cross-country trip in his Winnebago and have sex with a different girl in each state. Stewie decides to go along with him. Brian stops him, but then says he will go along too.

Eventually, while Quagmire is having sex with someone, Stewie goes in to get him but discovers Quagmire is chained to a bed naked, after the woman he hooked up with handcuffed him to the bed and took his cash. Stewie then takes the keys and goes off without Quagmire. Wanting to make good time, he gets pills from a trucker at a truck stop and, fully buzzed and awake, drives far west.

Brian goes to see what is up with him and sees that Stewie is not even on the road, but lost in a desert heading west. Brian tries to take control of the wheel, but Stewie will not let him and eventually they crash. Abandoning the Winnebago, they walk through the hot desert and eventually Stewie gives up.

Brian tells him that he has gone this far and can not stop now. Once they reach San Francisco, they head to the place where Stewie’s supposed real father lives. Stewie finds him and follows him out of the hotel. Then, a downhill car chase ensues. Stewie then crashes into a fruit cart and loses his father. Stewie decides to take the trolley and sits next to a man reading the newspaper. 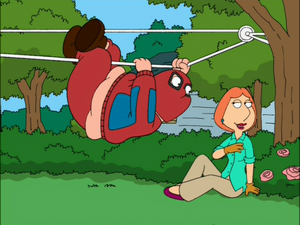 Stewie asks for the arts section and then sees that it is his father. But then the man explains, “I’m not your father, I’m you.” The storyline is continued in the next episode, “Stu & Stewie's Excellent Adventure.”

Meanwhile, Peter is trying to have sex with Lois but Chris and Meg keep intruding. Lois and Peter decide to get their kids to start dating. Lois teaches Chris how to treat a woman, manners, eating out, and to name the women of Sex and the City through example and torture, while Peter teaches Meg how to treat a man through shaving his back and loving the man’s flatulence. At the end, they send their kids off to get a boyfriend and girlfriend.

Previous Episode /// Bango Was His Name Oh \\\ Next Episode

Retrieved from "https://familyguy.fandom.com/wiki/Bango_Was_His_Name_Oh?oldid=218019"
Community content is available under CC-BY-SA unless otherwise noted.