Barbara was a Jewish holocaust survivor, as revealed in "Family Goy". When she married Carter, she had to conceal her religion, so that Carter could get into country clubs, which they both agree was "the right thing to do."

She once had an affair with Jackie Gleason, which traumatized their son, Patrick, as revealed in "The Fat Guy Strangler". Also, in "Peterotica", she left Carter when he was broke and went to Ted Turner, only to take his money and get rich again later on. She got back with Carter right after.

Both Carter and Barbara Pewterschmidt apparently have an addiction to sleeping pills and alcohol as noted in "The Fat Guy Strangler".

She appears to be somewhere around the age of 65. Barbara seems to be the only one of Chris, Meg, and Stewie's grandparents who actually notices them, although on seldom occasion Carter will appreciate his grandchildren as well such as taking Stewie out in "Grumpy Old Man". Unlike her husband, she is more tolerant of her son-in-law, Peter Griffin, getting along with him fairly well and even accepting his sexual advances after Lois had an affair with Bill Clinton in "Bill and Peter's Bogus Journey". This is in stark contrast with her now-estranged husband, considering Carter hates Peter intensely. However, in "When You Wish Upon a Weinstein", it is revealed that she doesn't believe that Peter is a sufficient provider for his family and believes that Lois would have been "better off married to a chimp."

In "Bill and Peter's Bogus Journey", Barbara is called upon by Lois and Peter for a favor. Lois then asks Barbara to have sex with Peter, which she readily accepts because she says her husband hasn't looked at her for a month which shows Barbara and Carter don't really love each other and have not made love in a long time. However, Peter cannot go through with the plan, even though it originally was his idea.

In Blue Harvest, Barbara plays the role of Beru Whitesun Lars, where she is paired with her Family Guy husband Carter as an on-screen couple. 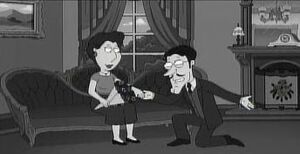 In episodes such as "Bill and Peter's Bogus Journey" and "You May Now Kiss the...Uh...Guy Who Receives", it is made clear that Barbara and Carter married because Carter was rich. However, in "Welcome Back, Carter", it is revealed that Barbra and Carter had fallen in love before they married. It is also revealed that Carter is a war veteran, and he and Barbara exchanged letters, and when that ceased, Carter was presumed dead. At a party Barbara and her new fiancé Roginald attended, he crashed it, and the two reaffirmed their love, sealed by a marriage proposal. However, in the latter episode, Carter was caught in an affair, and though Barbara demanded a divorce, she later forgave Carter. However, she deemed herself too old to remarry, so the two are still living in the same household.

The Pewterschmidts considered retirement after Carter fell asleep behind the wheel of their car in "Grumpy Old Man", causing a traffic accident. Carter soon became depressed and listless, only recovering his senses when he returned to work at Pewterschmidt Industries.

Portraits of Babs and Carter hang in Peter and Lois' bedroom, notably in "Family Guy Viewer Mail No. 2".

Carter locks Babs away in a mental hospital when he has an affair with Tricia Takanawa in "Carter and Tricia". When her situation remains unresolved by the end of the episode, Stewie notes that they will simply bring her back as needed.

Retrieved from "https://familyguy.fandom.com/wiki/Barbara_Pewterschmidt?oldid=206772"
Community content is available under CC-BY-SA unless otherwise noted.