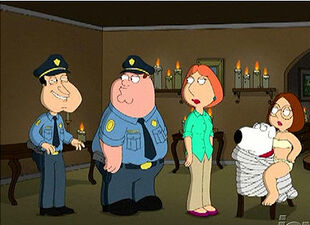 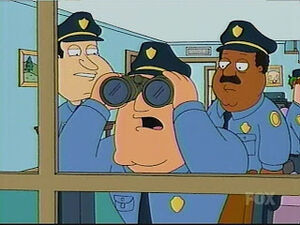 After Mayor Adam West deploys the entire Quahog police department to Cartagena, Colombia to search for a character from Romancing the Stone, Joe becomes bogged down at work, being the only officer not sent to Colombia because South America is “not wheelchair accessible." Because of this, Peter and the guys decide to become police officers to help Joe.

Meanwhile, Meg comes home from school, threatening to commit suicide because she does not have a date for her Junior Prom. As a last resort, Brian agrees to take her. 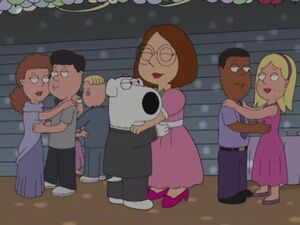 Brian hides his unhappiness in attending by getting drunk, but near the end of the night in the course of defending Meg, he manages to bring Connie D’Amico down a level by telling her she developed early and put out at age 12, and now she was afraid that her body would be so worn out at age 19 that even her step-dad wouldn’t want her. Almost immediately following this, Brian and Meg make out with each other. After their kiss, Brian then vomits and claims that it’s from the booze, not Meg.

After the dance, Meg begins to consider Brian her boyfriend, but Brian tells her he has no intentions to date her. Because of this, Meg becomes obsessed with Brian and begins to make bizarre advances at him. Feeling that he’s losing control of the situation, Brian tells Lois about Meg and how she loves him because he made out with her at the prom. As expected, Lois is furious and orders Brian to set things right. Even after Brian tells Meg that he will never be attracted to her, she knocks him out with a bag of Dog Chow, ties him up and then brings him to a hotel in an attempt to have sex with him, but is stopped by Peter and his friends.

Quagmire offers his services to straighten Meg out. Meg comes over to his house and, instead of sleeping with her as expected, he has a heart-to-heart talk with her, explaining that she doesn’t need to have a boyfriend to have fun as a teenager and gives her a book, Shel Silverstein’s The Missing Piece, to guide her.

Quagmire then goes into his bedroom to have sex with two hookers, but is put off by how one of them pronounces the word “whip”.

Retrieved from "https://familyguy.fandom.com/wiki/Barely_Legal?oldid=216365"
Community content is available under CC-BY-SA unless otherwise noted.