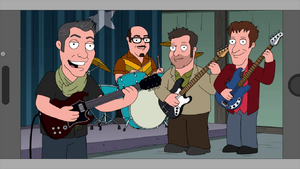 Barenaked Ladies is a Canadian rock band, known for songs such as "It's All Been Done", "One Week" and the theme song for the television series The Big Bang Theory.

"Jane" by Barenaked Ladies is among the songs that Brian lists that are named after girls in "Ocean's Three and a Half".

Barenaked Ladies is Peter's musical guests in one of his Six Second Talk Show episodes in "HTTPete", playing two notes from "One Week" before the show ends.

Retrieved from "https://familyguy.fandom.com/wiki/Barenaked_Ladies?oldid=214710"
Community content is available under CC-BY-SA unless otherwise noted.