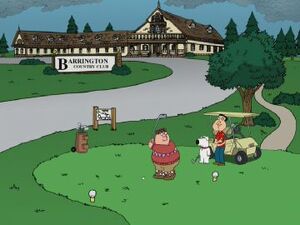 Barrington Country Club is a local country club in Quahog. Peter Griffin blows off his anniversary with Lois to play golf here in "Death Lives". His friend Cleveland Brown is unable to play with Peter and their friend Glenn Quagmire because of Loretta even though he would be the first black man to play there.

In "No Country Club for Old Men", Carter Pewterschmidt takes the Griffins to the country club. When he makes a spectacle out of himself while trying to keep Peter from getting attention, he is kicked out of the club and Peter is admitted in his place.

Brian and Stewie blind Carter at the country club in "The Finer Strings" in an attempt to get Brian's cushy job back as his service dog.

Retrieved from "https://familyguy.fandom.com/wiki/Barrington_Country_Club?oldid=192887"
Community content is available under CC-BY-SA unless otherwise noted.