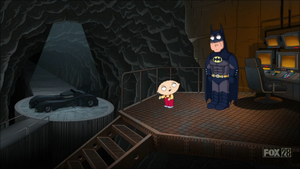 The Batcave is the secret headquarters of fictional DC Comics superhero Batman, the alternate identity of playboy Bruce Wayne, consisting of a series of subterranean caves beneath his residence, Wayne Manor.

Stewie points out to Batman the illogic of hiring workers to make the Batcave in "The Blind Side", noting that they had to be aware that something was going on. Batman brushes it off saying they were told it was a geological survey but Stewie doesn't buy the story, referring to the "giant lazy susan" where the Batmobile parks.

Retrieved from "https://familyguy.fandom.com/wiki/Batcave?oldid=118318"
Community content is available under CC-BY-SA unless otherwise noted.