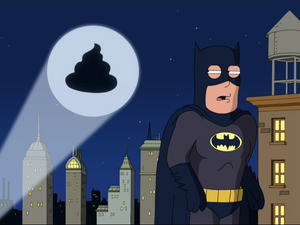 Batman, The Bat-Man and still referred to at times as The Batman, he is additionally known as The Caped Crusader, The Dark Knight, The Dark Night Detective, and The World's Greatest Detective, is a fictional comic book superhero co-created by artist Bob Kane and writer Bill Finger, appearing in publications by DC Comics. The character first appeared in Detective Comics #27 in May 1939.

In the original version of the story and the vast majority of subsequent retellings, Batman's secret identity is Bruce Wayne, a billionaire playboy, industrialist, and philanthropist. Having witnessed the murder of his parents as a child, he swore revenge on crime, an oath tempered with the greater ideal of justice. Bruce trains himself both physically and intellectually and dons a bat-themed costume in order to fight crime. Batman operates in the fictional American Gotham City, assisted by various supporting characters including his main sidekick Robin, occasional assistance from former sidekick Batgirl and hero Nightwing, the police commissioner James Gordon, and his butler Alfred Pennyworth, and fights an assortment of villains influenced by the characters' roots in film and pulp magazines. Unlike most superheroes, he does not possess any superpowers; he makes use of intellect, detective skills, science and technology, wealth, physical prowess, and intimidation in his war on crime.

In "Brian in Love", Peter pretends to be Batman to Lois Griffin's Catwoman.

Peter watches the 1960s Batman television series while Lois is preparing for sex in "Emission Impossible".

In "Blind Ambition", Peter interrupts the Superfriends meeting in the Fortress of Solitude by stating there are no more Cheez-Its. Both Batman and Superman look at him with annoyance.

Peter uses the Batman symbol as part of his guessed letters in the final, game-winning puzzle of his episode of Wheel of Fortune in "I Take Thee Quagmire".

Peter, while dressed as Spider-Man, sings his Spider-Man theme song to the tune of the 1960s Batman TV show theme in the second Stewie Griffin: The Untold Story segment "Bango Was His Name Oh".

His Hispanic counterpart lives in a run-down Hall of Justice with the other Mexican Super Friends in "No Meals on Wheels". He almost gets them evicted.

Batman get a completely unnecessary signal from Commissioner Gordon in "FOX-y Lady" where he sees a signal light letting Batman know that the Commissioner is going to the bathroom. Batman states that he "did not need to know that".

For the Superfriends opening for "Family Goy", Brian assumes the role of Batman.

In a cutaway gag in "Brian Writes a Bestseller", a guy in a coma dreams of writing a script of Batman vs. Predator.

In "Halloween on Spooner Street", a trick-or-treater is dressed as Batman. He gets candy from the Mayor at the Mayor's mansion.

Stewie points out to Batman the illogic of hiring workers to make the Batcave in "The Blind Side".

When Peter is worried that Patrick Pewterschmidt may have committed another murder in "Killer Queen", he threatens to do to him when he did to the Riddler. A cutaway shows a Batman-style fight with colorful verbs describing the action.

Batman's name briefly appears on a nonsense sign during "Come On Home" in "Candy Quahog Marshmallow!".

When Peter is introduced to George Clooney circa 1997 in "Foxx in the Men House", he notes that he was the second-worst Batman.

Quagmire's grappling hook escape in "Crimes and Meg's Demeanor" is a homage to Batman, notably the 2008 film The Dark Knight in which he snags a passing elevated train to escape.[1]

Adam West played Batman in the 1960's TV series. In the years between the end of the show and his work on Family Guy, he was constantly recognized as Batman, to his annoyance. The Family Guy crew had stated that no direct references to Mayor West as Batman would be made. However, West appears dressed as Batman in "Inside Family Guy", performing a running gag on the show in which he would appear to be scaling the side of a building. As he walks upright but hunched over while tugging a rope, he notes it was how they used to do it in the old days.

Brian notes that Dr. Hartman has a Batmobile near his colon in an x-ray taken in "Dead Dog Walking". Dr. Hartman hopes that it will just drive out when the Bat Signal appears. In the same episode, Chris and Stewie go to 'The Vaped Crusader' vape shop.

In "Pal Stewie", Hudson receiving the gas mask from Stewie and being instructed to put it on parodies a scene from the 1989 film of Batman when the Joker sends a similar gift to Vicki Vale in an art museum.[2]

When Johnny Weir disarms Chris who attempts to beat him up for Stewie in "Griffin Winter Games", Johnny proceeds to beat him up 'like a Batman fight, only with gay words' using graphics styled after the 1960s Batman series.

The ending theme to "Adam West High" is styled after the 1966 Batman theme in honor of Adam West.

The 'Babsmobile' in "Absolutely Babulous" is a parody of the Batmobile.

Batman gets annoyed with Alex Forest turning on and off the bat signal in the Fatal Attraction segment of "Heart Burn".

Retrieved from "https://familyguy.fandom.com/wiki/Batman?oldid=216793"
Community content is available under CC-BY-SA unless otherwise noted.