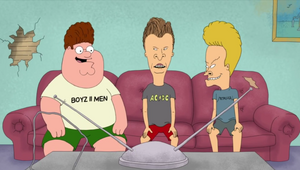 Beavis and Butt-Head is an American adult animated sitcom created by Mike Judge. The series centers on two socially incompetent teenagers, who tend to chuckle whenever they hear words or phrases that could be even vaguely interpreted as sexual.

The pair, along with Peter find amusement when Lois says 'would', taking it for 'wood', in "Peter & Lois' Wedding". The three share a laugh before a modified version of the Beavis and Butt-head title screen appears with Family Guy on it. The trio also appear chuckling while superimposed on two skyscrapers until Peter turns sad, realizing he has gotten married.

As in the original series, the pair are voiced by Mike Judge.

Retrieved from "https://familyguy.fandom.com/wiki/Beavis_and_Butt-Head?oldid=218985"
Community content is available under CC-BY-SA unless otherwise noted.