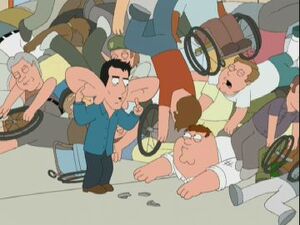 Benjamin Edward "Ben" Stiller (born November 30, 1965) is an American comedian, actor, writer, film director, and producer. He is the son of veteran comedians and actors Jerry Stiller and Anne Meara.

He appeared in "The King Is Dead" in There's Something About Stewie, with Stewie Griffin as himself instead of Cameron Diaz as Mary.

In "Hell Comes to Quahog", his character of Alex the lion from Madagascar appears and was voiced by David Boat.

In "Whistle While Your Wife Works", Glenn Quagmire describes a scene of Stiller's film Along Came Polly over the phone to Peter Griffin.

In "No Meals on Wheels", he was portrayed with freakishly large ears. He helped Peter believe in himself. After his mission was accomplished, he flew away using the ears. On the ground, Peter declared his movies stink. Later, he confronts Peter, who at this point is on the bottom of the Crippletron pile. He refuses to help him because of what he said about his movies.

Joe watches Stiller in his film Tower Heist in "This Little Piggy".

Ida and Quagmire watch Night at the Museum in "Bri-Da", with Ben appearing on the DVD cover. Ben can also be heard arguing with Peter Gallagher's Attila the Hun in an uncredited archive performance.

Retrieved from "https://familyguy.fandom.com/wiki/Ben_Stiller?oldid=215361"
Community content is available under CC-BY-SA unless otherwise noted.