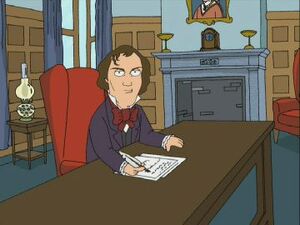 Benjamin Disraeli, 1st Earl of Beaconsfield, KG, PC, FRS, (21 December 1804 – 19 April 1881) was a British Prime Minister, parliamentarian, Conservative statesman and literary figure. He served in government for three decades, twice as Prime Minister of the United Kingdom. Although his father had him baptised to Anglicanism at age 13, he was nonetheless the country's first and thus far only Prime Minister who was born into a Jewish family. He played an instrumental role in the creation of the modern Conservative Party after the Corn Laws schism of 1846.

Before and during his political career, Disraeli was well known as a literary and social figure, although his novels are not generally regarded as a part of the Victorian literary canon. He mainly wrote romances, of which Sybil and Vivian Grey are perhaps the best-known today. He is exceptional among British Prime Ministers for having gained equal social and political renown.

In "One if by Clam, Two if by Sea", Disraeli has a brief appearance after Peter Griffin mentions his name. The scene cuts to a nineteenth century man penning a document in a large office. Disraeli, looking at the audience, simply acknowledges that the viewers don't know who he is.