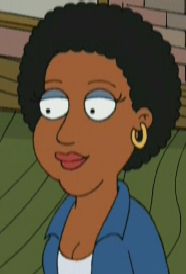 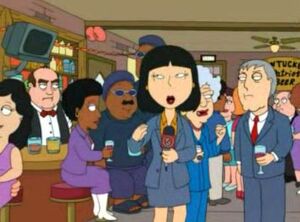 Bernice was the girlfriend of Cleveland Brown briefly after his breakup with Loretta. She appears in "Believe It or Not, Joe's Walking on Air". Strangely enough, she also appears to be in Stewie Griffin: The Untold Story in the end segment with Cleveland, although she wears a purple jacket instead. She also appeared in "You May Now Kiss the...Uh...Guy Who Receives" in the wedding sitting next to her then-boyfriend and has a crowd-scene cameo in "Ratings Guy".

Retrieved from "https://familyguy.fandom.com/wiki/Bernice?oldid=164708"
Community content is available under CC-BY-SA unless otherwise noted.