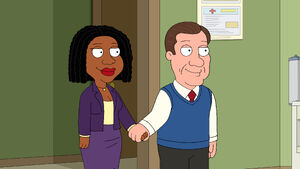 Bert and Sheila are an interracial couple who become new managers at the Pawtucket Brewery following the death of Angela in "Pawtucket Pete". They were hired because one of the shareholder's favorite songs was "Ebony and Ivory". They have a habit of completing sentences while alternating the words between themselves and to make things easier for the employees to remember them, they suggested that they could be referred to as 'Beila' or 'Shurt.'

Seeking a new mascot for the Brewery, they choose Peter Griffin after they discover him enjoying a beer in a restroom stall. But when they also become enamored of Brian they make him the sidekick until he proves to be more popular and have the pair switch roles.

In "Trans-Fat", they let Peter know about special benefits that he is entitled to while he is believed to be transgender, plus, Sheila takes him out a girls afternoon. But when he is knocked into a coma at a bar, they sign him up for gender reassignment surgery.

Retrieved from "https://familyguy.fandom.com/wiki/Bert_%26_Sheila?oldid=231092"
Community content is available under CC-BY-SA unless otherwise noted.