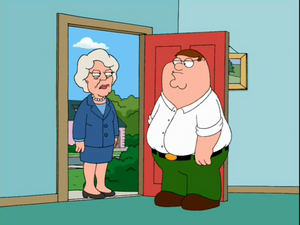 Betty Marion White (born January 17, 1922), better known as Betty White, is an actress and television personality, most famous for her starring role in the NBC sitcom, The Golden Girls. She has won five Emmy awards and was married three times, most notably to Password host, Allen Ludden, from 1963 until his death in 1981.

She appears in "If I'm Dyin', I'm Lyin'" as a celebrity square on Hollywood Squares.

She was mentioned by Chris in "Dog Gone", saying that she was in the Animal Rights group PETA, to which Peter responds that his statement doesn't make sense because he thinks everyone's referring to Peter.

She also appears as one of the panelists on The Match Game in "Mr. Saturday Knight".

Retrieved from "https://familyguy.fandom.com/wiki/Betty_White?oldid=203910"
Community content is available under CC-BY-SA unless otherwise noted.