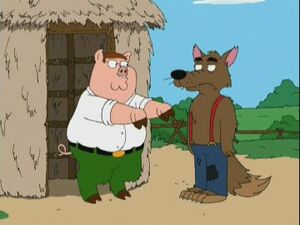 The Big Bad Wolf is a term used to describe a fictional wolf who appears in several precautionary folkloric stories, including some of Aesop's Fables and Grimm's Fairy Tales.

He appears in the episode "Padre de Familia" where he attempts to blow down Peter Griffin's cousin Peter the Pig's straw house. The wolf stops after Pig claims that he defecated in there and that if he blows down the house, the smell will spread throughout the forest.

Brian performs in the role of The Big Bad Wolf in the story of Little Red Riding Hood in "Grimm Job".

Retrieved from "https://familyguy.fandom.com/wiki/Big_Bad_Wolf?oldid=195741"
Community content is available under CC-BY-SA unless otherwise noted.