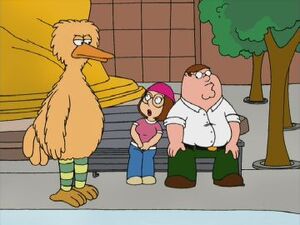 Big Bird is a protagonist of the children's television show Sesame Street. Big Bird, like many of the other Sesame Street characters, is a Muppet character. He is sometimes referred to simply as "Bird" by his friends. Officially performed by Caroll Spinney since 1969, he is an eight-foot two-inch tall bright yellow bird.

In "I Never Met the Dead Man", Stewie plays with a toy phone, threatening Big Bird and other Sesame Street characters.

In "A Picture's Worth a Thousand Bucks", he was attracted by Meg's bird calls.

The buttons on Stewie's phone in "Model Misbehavior" are Big Bird, Grover, Ernie, and The Count.

In "Believe It or Not, Joe's Walking on Air", his legs are one of Joe Swanson's choices when he seeks a transplant.

He is lampooned as Large Bird in the American adaptation of Jolly Farm Revue, which began production in "Go, Stewie, Go!".

In "Brian's Play", he appears as a meth addict to one of Beaker's inventions which gets him fired by Stewie as the resources director for the Muppets.

Sesame Street's move to HBO is marked with more adult content in "The Peter Principal", with Cookie Monster munching on Big Bird's ass instead of cookies.

Retrieved from "https://familyguy.fandom.com/wiki/Big_Bird?oldid=224460"
Community content is available under CC-BY-SA unless otherwise noted.