[For a complete script, see: "Big Trouble in Little Quahog" at the Transcripts Wiki]

Stewie: [Explaining his cat face paint to Brian] I'm a calico and my name is Humphrey. 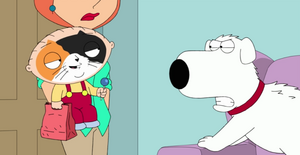 Lois: [While vacuuming] I HATE MY LIFE AND NOBODY CAN HEAR ME SAY IT RIGHT NOW.

Stewie: What's with your gay character names, lately? Stacy Jacks, Jack Reacher? Who are you playing next?
Tom Cruise: Oh, right. Try to make this sound gay. Next up, I play Headmaster Bates Mann.
Stewie: Anything else?
Tom Cruise: Actually yes. After that, I'll be taking the role of Major Dixon Butts, then Senator Rod Clutcher.

[Stewie talks out loud, as he types up a text to Brian]
Stewie: Brian, sorry I got testy. Let's bury the hatchet. If you're free, I'd love to hear about any new writing projects, you're working ...
[Brian knocks on the door]
Stewie: At least wait for me to send it.

Stewie: Well, Brian. You seemed to enjoy belittling me, so I decided to belittle you.

Brian: I'm sorry!
Stewie: For what?
Brian: For calling you a shrimp.
Stewie: And?
Brian: What do you mean, "And"?
Stewie: Come on, you know what I want.
Brian: And ... all four chairs would totally turn for you, on The Voice.

Stewie: I'll have what she's having.

Vernon: My name's Vernon. I'm a water bear.
Brian: Water bear? What's a water bear.
Stewie: They're predominantly water-dwelling, eight-legged, segmented micro-animals. They're also known as a moss piglet or a tardigrade.
Vernon: You can call me "Tardy", but I'm always on time.

Brian: I can't believe there's this whole universe, hidden here in your rug ... where everyone speaks English.
Stewie: Okay, Brian, take the ride.

[Meg and Chris suffer through gaseous rat poison, and a portal to the other side opens and Prince comes out]
Prince: Meg, Chris, come to the light.
Chris: Meg, no! Don't do it! Don't go to Prince!
Prince: Come to the purple light, Meg. Come taste infinity!
Chris: Don't listen to him, Meg!
Meg: But he's so talented and he's got so many drugs.

Retrieved from "https://familyguy.fandom.com/wiki/Big_Trouble_in_Little_Quahog/Quotes?oldid=223646"
Community content is available under CC-BY-SA unless otherwise noted.