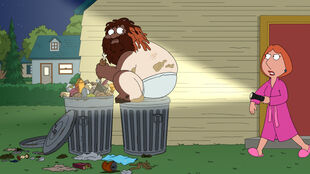 Bigfat
Peter becomes feral after getting lost in Canada. 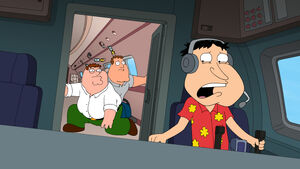 After a dream sequence involving the Smiths from American Dad! and Hank Hill, Quagmire asks the guys to come along with him on a trip to Canada while working on a jungle gym for Stewie after demonstrating that he can read French. Quagmire asks that they lie about where they are going in order to keep the wives from complaining to him about going to strip clubs. On the private luxury plane Quagmire acquires, Peter's stunt involving opening the door causes them to crash in the wilderness. They build shelter and settle in for the night. Thanks to Peter, Quagmire's legs get broken. With Peter the only able-bodied person left he sets out to find help but just after he leaves they find they crashed into a person's back yard. Quagmire worries about Peter but he has already disappeared into the woods. 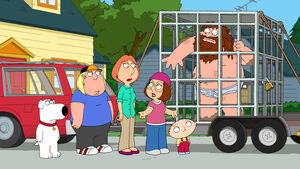 Two months later they nearly give up the search when signs of Peter start to turn up. The family rushes to where Peter left a doll of Edna Garrett and find him in the bushes, a nonspeaking feral beast. Getting him home, they try to reintroduce him to his life. Videos that Peter made before he became feral backfire when Peter causes a setback, Stewie tries to make the best of things by singing with Peter and Lois awakes to find Peter in the garbage. Quagmire comes over to check on things and finds that they are not working and the family decides to return Peter to the wild to be happy. As Lois and the family cries at his departure, Peter heads off towards the woods but when Meg says goodbye, Peter struggles to tell Meg to shut up and slowly regains his speech.

At home and returned to normal in only a day, Peter announces that Quagmire is taking him to a strip club in Canada where he is surprised by Edna Garrett as a stripper.

Retrieved from "https://familyguy.fandom.com/wiki/Bigfat?oldid=198686"
Community content is available under CC-BY-SA unless otherwise noted.