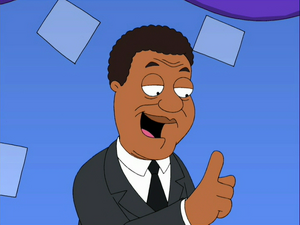 A veteran stand-up performer, Cosby in 1965 landed a starring role in the action series I Spy, becoming one of the first African-American performers to star as a main character in a scripted comedy or drama. He is also well known for creating Fat Albert and the Cosby Kids, a widely hailed animated series depicting a group of African-American youths growing up in a Philadelphia ghetto; and The Cosby Show, a 1980s situation comedy about an affluent African-American family living in Brooklyn.

He has also served as an advocate for African American youth and education, and is involved in many humanitarian causes.

Cosby first appeared in "Peter, Peter, Caviar Eater", where Cosby was shown in a The Cosby Show cutaway as Dr. Huxtable, responding by making silly faces when Theo tells him that he got a girl pregnant, he continued to do so until his head popped off.

He later appeared as host for the show, Kids Say The Darndest Things, in "Brian Does Hollywood".

An aerobics class at the 1980s TV convention in "Brian Goes Back to College" is patterned after his opening-theme dance moves on The Cosby Show.

In "Hell Comes to Quahog", Quahog 5 News reports of a planned rolling blackout. Diane Simmons refers to an electric cooperative as The Electric Company and a parody of the opening plays, which included Bill Cosby as a cast member.

He is also mentioned in "The Man with Two Brians" when the Griffin family is sitting on their couch and New Brian shows the family a video of Bill Cosby tackling a midget and subsequently beating him.

He appears again when Lauren Conrad says to Brian that she is making a computer animated sex tape of her and Cosby in "We Love You, Conrad".

He also appears as one of the voice settings for The African-American Heart Monitor, invented in "Business Guy".

In "Halloween on Spooner Street", Chris dresses up as Cosby. Lois makes him change into an Indian costume, believing the depiction of Cosby to be racist.

The family watches The Cosby Show in "Peter's Sister", updated to show the entire cast and guest stars doped up after his sex scandal became public.

Cleveland and Jerome head out to see a mural about black achievement at a high school in "Run, Chris, Run", although Cleveland notes that a manila folder has been blacked over Dr. Cosby's face.

in "Carter and Tricia", Carter Pewterschmidt says that the reason for the existence of a drug called "triple" that makes you defecate, orgasm, and vomit is because of Cosby.

When Santa Claus concedes that Peter wasn't the worst Santa in "How the Griffin Stole Christmas", he holds up a copy of Jet magazine with Bill Cosby dressed as Santa on the cover, proclaiming him as the worst Santa.

Bill appears as jester "Sir William of Cosby" in Queen Victoria's court in "V is for Mystery". During his performance, he is applauded by the men while the women have passed out, which he notes he will get away with for another 122 years.

The guys watch Marvel's The Offenders, a parody of The Avengers featuring sexual predators in "HTTPete" led by Bill. Woody Allen asks if Matt Damon will be coming but is told by Cosby that he won't, but is aware of what is happening, referring to a speech made defending some sexual predators and men in general in Hollywood.[2]

Referring to the actor's Keratoconus, which changes the shape of the corneas and can lead to blindness, Peter mentions looking at Bill in his single eye while in the Rhode Island State Prison in "Shanksgiving".

While telling the story of Noah in "Holly Bibble", Peter borrows and acknowledges material from Bill Cosby.[3]

In most appearances, Cosby is voiced by Kevin Michael Richardson, while in others, he is voiced by Seth MacFarlane.

Retrieved from "https://familyguy.fandom.com/wiki/Bill_Cosby?oldid=222365"
Community content is available under CC-BY-SA unless otherwise noted.