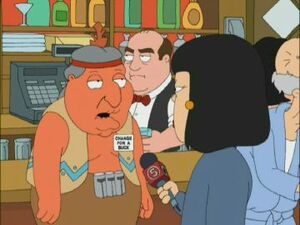 William Mark "Bill" Fagerbakke (born October 4, 1957) is an American actor and voice actor. He appeared on television in such roles as assistant coach "Dauber" Dybinski on Coach and for voicing Patrick Star on SpongeBob SquarePants.

He is credited as the voice of "Indian", whose actual name is Change For A Buck, in Stewie Griffin: The Untold Story.

Fagerbakke also reprises his role as Patrick Star via direct episode audio in "Road to Rupert" where Star and his best friend SpongeBob SquarePants sing the "Campfire Song Song".

Retrieved from "https://familyguy.fandom.com/wiki/Bill_Fagerbakke?oldid=198671"
Community content is available under CC-BY-SA unless otherwise noted.